Influence of different powder properties on the material characteristics

Ti6Al4V is the most commonly used alloy, because of its well-balanced property profile.  Different heat treatments allow to tune microstructure and properties for different requirements and applications. During the use phase of powder, effects like out-washing of fine fractions, pick up of oxygen as well as enrichment of splashes change powder characteristics. In addition, there is a possibility of powder decomposition due to the powder handling process. Therefore, the powder quality permanently changes during the manufacturing process. Another point is the lot to lot variation of the powder quality inside the specified ranges. Scope of this project was to investigate the influence of relevant changes of powder characteristics on material as well as part properties.

Objectives
The first important step in influencing the powder properties is to create different particle size distributions (PSD) of the titanium powder. This is done through systematic manipulation by sieving different size distributions. The second important influencing factor is the uptake of oxygen of the powder during the manufacturing process. The influence of oxygen on the powder characteristics will be investigated by aging the powder under oxygen atmosphere at a defined temperature and time. After influencing the powder properties, the next step includes the manufacturing of the test specimen with the aim of studying the impact of different PSDs on mechanical part properties. The specimen production is carried out by using the selective laser melting manufacturing process. The specimen are tested only in one material condition. Therefore, all specimen are subjected to an additional heat treatment after the building process. The last step includes the experimental investigations to determine mechanical and fracture mechanical properties.

Procedure
The project aim is the investigation of the powder material with its specific influencing factors during the use-phase. Of particular interest thereby is the lot to lot variation of the powder quality inside specified ranges. Because of that, it is necessary to investigate how a shift of the median value x50 affects the material properties. The approach is to shift the median value as near as possible to the range limits of the particle size range. The first generated size distribution is in the range between 45 – 66µm with an median value of d(0.5) = 45µm (upper limit). The second generated size distribution is in the range between 21 – 54µm with an median value of d(0.5) = 30µm (lower limit). The artificial aging process takes place inside a climate chamber with standard atmosphere condition. In this regard a temperature of 300°C is provided, because from this temperature the titanium powder absorbs oxygen very easily. Since the aging process is executed under standard atmosphere, the nitrogen content of the powder must also be investigated. At first, processing times of one, four and eight hours were evaluated to analyze how the oxygen and nitrogen content develops and to identify meaningful aging times. Based on this, the oxygen and nitrogen content of the manipulated titanium powder were determined through LECO analysis. For a complete powder characterization different test procedures are necessary. In particular, three different material tests are carried out. For all three types of experiments it is necessary to manufacture test specimen with the virgin and the manipulated powder. All specimens were built on the SLM 280HL under an argon inert gas atmosphere. Earlier investigations have shown, that the material characteristics of titanium in the as built condition are significantly worse. For this reason, all specimen are subjected to a heat treatment at 800°C in an argon inert gas atmosphere for two hours. Finally, tensile and fatigue tests are carried out to determine the tensile and fatigue strength. Furthermore crack propagation experiments are designated in order to establish crack propagation curves for all different powder states.

Figure 1: SEM-images and PSD of the investigated powder types

The results for the tests with different PSD show, that for the examined powders the crack propagation curves have almost the same curve progression, especially in the threshold area and in the middle region. Only in the fracture toughness region some slight differences are observable. In summary it can be said, that there is obviously no significant influence on the crack propagation curve or the threshold value when using different PSDs.

In case of an aged powder, the PSD has a significant influence. For the powder with the larger median value, the aging process leads to a barely noticeable change in the threshold value as compared with the virgin condition. In contrast, an aging process of the powder with smaller median value leads to a significant decrease of the threshold value. The fundamental reason for this result can be the smaller particle size. Due to the smaller particle size, there is a larger surface, which is more influenced by the aging process. Therefore, the potential oxygen uptake of the powder is higher with smaller sized particles. With regard to a fracture mechanical analysis, it can be said that in the presence of an aged powder, a powder with a larger average particle size has less influence on the fracture mechanical properties.

Outlook
Further investigations could be tensile, fatigue and fracture mechanical experiments with a mean PSD from the same powder lot. In addition, the influence of different heat treatments, the building direction or the powder humidity could be investigated. 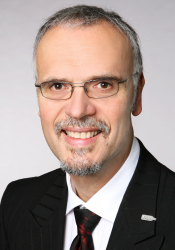